A short history of Roanoke, Alabama. 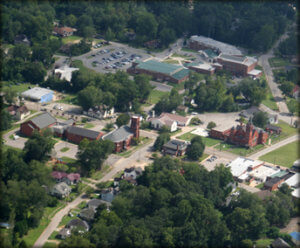 Prior to the removal of the remaining Creek tribes in 1836, the area which became Roanoke, Alabama was inhabited by natives of the Muscogee Indians. The region was covered with virgin forests.

There were occasionally, incidents with Native Americans. Roanoke was originally called High Pine when it was settled in the early 1830s. The entire town was burned to the ground by the natives during the Creek uprising in 1836. The town was incorporated by an Act of Legislature on December 13, 1900.

In 1901, Roanoke acquired its greatest economic profit when the W.A. Handley Manufacturing Company was built along with the Lowell Mill Village. The mill produced yarn, canvas, and fabric throughout its history. For more than 70 years, the mill was the economic backbone of the town, along with the Palm Beach Company which produced men’s sportswear and hired mostly the female population.

In 1978, Amoco Fabric and Fibers opened and brought a breath of life back to Roanoke with the hiring of several hundred employees. Candlewick Yarns, Stephanie Fashions, Fashion Star, Steel-Fab, Inc., The Randolph County Hospital and Rolane were other large employers and helped to maintain the town with sufficient economic levels.

The Roanoke City Schools System supports Handley High School, Handley Middle School, and Knight-Enloe School.In 1907, W.A. Handley gave land and buildings to the city, at which time the name was changed and has remained a strong point for the city. Thousands of successful students have graduated under the banner of Handley High.

After the highway 431 by-pass was built in the 1970s, many businesses moved to the by-pass in an effort to court passengers traveling the highway. The once successful Main Street suffered as a result.

The city of Roanoke’s municipal buildings consist of the City Jail on West Point Street, City Hall on Main Street, and the Fire Departments on Chestnut Street and US Highway 431, The Annie L. Awbrey Public Library, The Poole-Fisher Recreation Center, The Recreation Center, Kids Town, and The Roanoke Nutrition Center.

Additional information and history of Roanoke, Alabama can be found at the Museum and Annie L. Awbrey Library on College Street.

(Written for the City of Roanoke by Rhonda Bailey Baldwin)